Link to this page

The Boston Massacre, 5th March 1770
Order a Hand-Painted Reproduction of this Painting 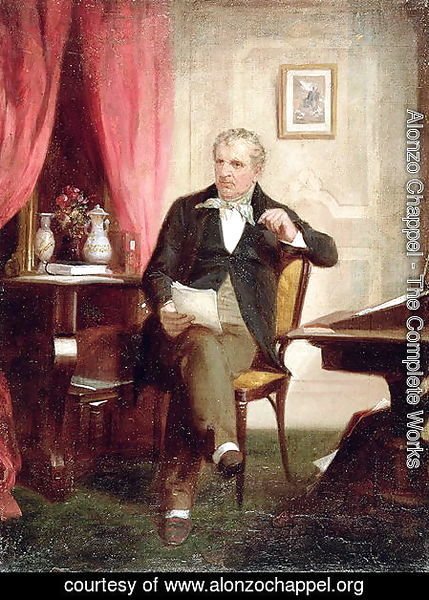 Alonzo Chappel was born in New York City on March 1, 1828 to William P. and Maria Howes Chappel. The family resided at 165 The Bowery in lower Manhattan on property owned by Chappel's grandparents opposite the Old Bowery Theater.

William Chappel (1801-1878), a tinsmith of Huguenot descent, was a man of moderate means and unable to provide an extensive education for his two sons, Alonzo and George. However, from all indications he and Maria encouraged Alonzo's early efforts at portrait painting; at the age of nine, Alonzo reportedly contributed a portrait titled "The Father of His Country" to the American Institute Fair; by the age of twelve, he was regularly setting up his easel on the sidewalks of New York and charging $5.00 or $10.00 to execute a portrait of any willing passerby.

In 1842, the fourteen-year-old Chappel left school and learned japanning and window-shade painting. Two years later he was listed as an artist in the New York City Directory; by this time he had developed considerable skill and was charging $25.00 for a portrait. The following year Chappel enrolled in the antique class (designed to teach students to draw from casts of antique sculpture) at the National Academy of Design. This appears to be the extent of his formal art training.

The National Academy at that time was headed by Samuel F.B. Morse, a prominent artist today better known for his invention of the telegraph. In the 1820s he had concluded that New York's American Academy of Fine Arts (founded in 1802) no longer met the needs of young artists and students. Thus Morse and others decided to form a new and separate organization to be called the New York Drawing Association, predecessor of the National Academy of Design.

In addition to the exhibitions held at the National Academy, there were few picture galleries available as Chappel came into his maturity during the 1830s and 1840s. The American Art-Union (1839) held exhibitions free of charge, and in 1844 the New-York Gallery of the Fine Arts, organized after its purchase of Luman Reed's collection of American art, displayed its paintings in the old Rotunda in City Hall Park. Little else could be seen, although taken together these institutions provided a fair representation of the available portrait and history paintings produced during this period.

In 1848 Chappel lived at 130 1/2 Fulton Street in Brooklyn, where he continued his lucrative portrait business and branched out into stage scenery decoration. About this time he married Almira Stewart at Brooklyn's Plymouth Church of the Pilgrims. He reportedly visited Cuba the following year to produce scenes for a commission, and from 1849 through the early 1850s he exhibited genre paintings at the American-Art Union and participated in shows at the Brooklyn Art Association, the National Academy of Design, and the prestigious Goupil Gallery. 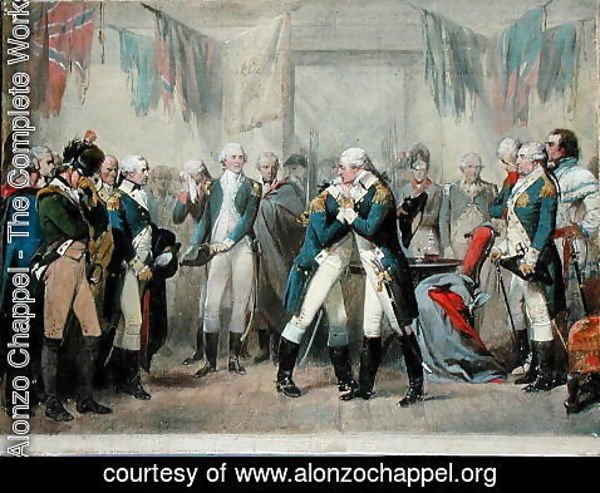 It was at Goupil's around 1856 that he came to the attention of the Reverend Elias Magoon. The minister was an important collector of paintings and sketches by such major American artists as Benjamin West, Thomas Cole, and Frederic Edwin Church. After meeting Chappel and seeing his work, Magoon begin to collect his drawings. Recognizing the value of Chappel's work as illustration, Magoon reportedly introduced the artist to Henry J. Johnson of the publishing firm of Martin, Johnson, and Company, well known for its illustrated publications on history.

About the same time he began working for Johnson, a picture importer named Keith is said to have guaranteed Chappel $7000 a year to move to England and begin painting pictures that he could send back to America. It must have been a tempting offer; imported pictures generally commanded higher prices than their American counterparts. However, Chappel chose to accept an offer by Johnson to design the illustrations for a work then in preparation, which was John Frederick Schroeder's "Life and Times of Washington", subsequently published in 1857.

The success of this first endeavor brought about a harmonious working relationship with this firm and its five successors that endured until Chappel's retirement in 1885. The publishers hired some of the best engravers of the day to translate Chappel's paintings and drawings into illustrations for their volumes on history, portraiture, and literature. Often sold on a subscription basis, their books contain his portraits of major American and European figures and important events of American history from colonial times through the Civil War.

In 1857 Chappel and several well-known artists, including George Inness, formed The Sketch Club. The club's objectives were to encourage original works of art and to establish a social organization for artists. At semimonthly meetings members displayed and critiqued each other's work. Membership soon reached forty, and the "general public became aware of the existence of a large and active art circle" in Brooklyn.

The Sketch Club provided the basis of the membership for the Brooklyn Art Association, which then expanded the categories to include lay members. By 1866 the Art Association's lack of interest in the concerns of artists prompted Chappel and others to break away and found the Brooklyn Academy of Design, an organization controlled exclusively by artists, whose objective was the "cultivation and extension of the art of design, with the understanding that academicians should be professional artists of any of the four arts of design; Painting, Sculptuary, Engraving and Architecture."

Chappel's previous experience at the National Academy of Design may have provided the needed expertise to develop a successful organization: he was made Second Vice-President, and he contributed a large number of antique casts to the school. When the organization developed financial problems, a concert was held to raise funds. The latter assured the existence of the school, and by 1869 the academy was offering free art instruction to more than sixty students.

Chappel's career was flourishing, but his personal life was marred by the death of his wife, Almira, June 14, 1863, leaving him a widower in charge of four children. Some years later he remarried Abbie J. Briggam, a widow with one son. Abbie and he may have had additional children. It is known that Chappel had a son named Alonzo and a daughter called Ollie, but little is known of them and nothing of any possible descendants.

In 1869 the Chappels purchased a parcel of land along Glover's Pond near Middle Island in Long Island's Suffolk County. Around 1871 they built a house there, and he established a sort of art colony which resulted in the renaming of the pond to "Artist's Lake."

His enormous output became legendary during this period. (According to some reports a crew of young artists, nicknamed "Chappel's factory," completed his canvases in order to meet the publisher's deadlines; however, Chappel's surviving works show no evidence of having been created in this way. It was there that Chappel spent the last two decades of his life illustrating, among other books, Duyckinck's "History of the World, Ancient and Modern" (1871), "Portrait Gallery of Eminent Men and Women of Europe and America" (1872-73), and after many years of work "The Complete Works of Shakespeare" (1888). Chappel was one of the two illustrators (F.O.C. Darley was the other) for this work, a three-volume collection published by Chappel's long-time publisher, Henry J. Johnson. The illustrations are reproduced as photogravures, the only time in Chappel's thirty-year career that his pictures were published in a form approximating their actual appearance.

The last years Chappel spent at Middle Island with his family should have been ones of quiet, for he had a career as one of the most prolific illustrators of the third quarter of the nineteenth century. They were marred by a stranger, who appeared at his door one morning and threatened him. Chappel tried to drive the man away, but the intruder, evidently insane, became violent and attacked the artist. To save himself, Chappel drew a revolver and shot the man dead. "The horror of this event," reported "The Brooklyn Eagle" a quarter of a century later, "haunted him during the remaining four or five years of his life." On July 20, 1885, he consigned for auction his library of 343 volumes on subjects ranging from history and biography to art and literature. Two years later, on December 4, 1887, he died at his home and was buried in the local Presbyterian cemetery. (From Half Hollow Hills)

Report an error on this page